The French have always been fascinated by chocolate, which first arrived in 1615. In those days it was pure luxury, extremely expensive, and considered to be an aphrodisiac. French confectioners mixed the cocoa bean paste into a liquid and added spices or flavourings, making it into a drink. Chocolate only really became accessible during the 19th century when machines started to be used which made production cheaper. It was still thought to be medicinal, so the first mass producer was a Pharmaceutical company, and chocolate was actually sold in the French chemist shops. However, it was not long before popularity turned it into a culinary delight accessible to all, and exclusive chocolate shops sprang up in every town. Today, French chocolatiers are highly trained, producing delights specific to each region, and even the traditional Christmas chocolate Yule log, Buche de Noelle. Paris holds the title of the Capital of Chocolate, with more than 300 charming specialist chocolate shops, which are a joy to visit especially during the festive season. 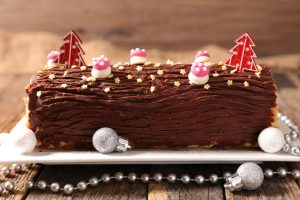 The French love of chocolate extends to their culinary skills too, with the ingredient featuring in many famous recipes and cakes, especially at Christmas. The 13 Desserts is a tradition known as Reveillon, which originally heralds from Provence. The deserts are served after Midnight Mass, incorporating a range of sweets, cakes and other glorious treats. Among these delights is the Christmas log, Buche de Noel, which is a chocolate heaven served throughout France during all the Christmas season. The very first French traditional Christmas cake dates back to the late 1800s. It pays culinary homage to the Yule log and is a light Genoise cake flavoured with vanilla and shaped into a roulade. The cake is rolled with whipped cream, chocolate, and the richest filling of buttercream. Smothered in luxurious chocolate, Buche de Noel is then lightly dusted with sugar frosting for a snowy finish. Every December, French stores fill up with this Yule log speciality and patisseries make their cakes with inventive designs and decorations. It has almost become a tradition reflecting cultural pride!

In France, chocolate is an art form, and this is particularly seen around the festive season. It provides the perfect excuse to indulge in the most exquisite and intensely flavoured chocolates and cakes, together with buying gifts for friends and family. Treat yourself to a French Christmas courtesy of Avionero and try the mouthwatering Buche de Noel cake first hand. Chocolate shops are filled with them, along with seasonal creations, trees and snowmen. Some artisans even decorate their store windows with Christmas scenes and amazing full-sized chocolate characters. Choose from small filled chocolate bites topped with ganache or praliné, fruit and caramel. Savour chocolate bars of every shape and size, together with Artisan chocolates which are filled and hand dipped. The chocolate boutiques are sleek, stylish and expensive, letting the flavour and the quality ingredients speak for themselves. So if you thought that a trip to France was all about cheese and wine, then you are missing out on the heavenly experience of their traditional chocolate Christmas cake.